The program is made for the planning of plants to the flue gas treatment, like desulphurization, denox etc. It supplies facts of gas mixtures which are based on air, as moist or dry air or e.g. flue gas and exhaust gases. Possible also the computation of operations at these gas mixtures such as a mixing, quenching, cooling/heating, and compressing and dehydratation. Therby gas facts in each position of the flue gas way in the projected or current plant are determined. In addition it supplies facts over freight of the gas components, water consumption for quenching, water- and acid dew point, as well as the physical characteristics for the gas mixture. It also makes possible the computation of drying processes. 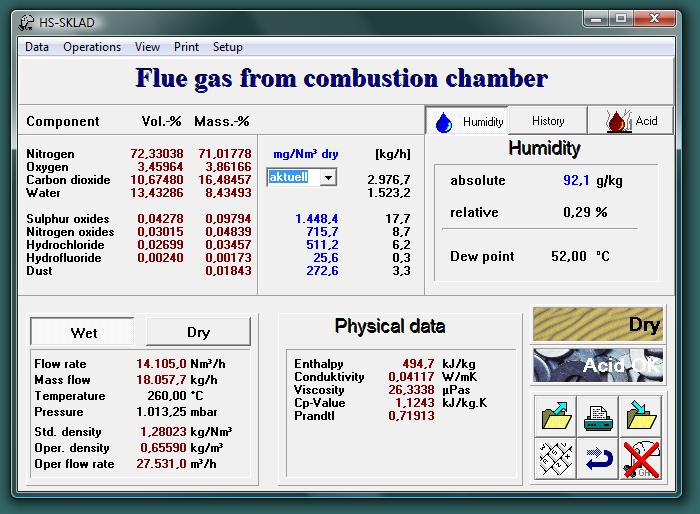 The facts, which are supplied for each gas mixture are:

The gas mixtures are based on air and are consistong of nitrogen, oxygen, carbon dioxide, water, sulfur dioxide and -trioxide, nitrogen oxides, hydrogen chloride, hydrogen fluoride and dust. The data input is very flexible. The composition can be entered in volume and mass per cent. For pollutants also in mg/Nm3 with and without oxygen reference. The humidity can also be modified later. A droplet carry over in saturated gases is considered.

The following operations at the gas mixtures are implemented in the program:

Operations can be accomplished according to different criteria. So the quenching can be computed in such a way that a given temperature adjusts itself, a desired relative humidity reached, or a well-known mass water evaporated. Similar flexible the cooling/heating and mixing will be accomplished.